A downloadable game for Windows and macOS

Read the moves and win the fight.

This game is made for the prompt "One Button Game". I made everything except for the sound effects, which are from Game Center's Audio Resources library.

This is veeeery well designed like everything just works together really well. The animations, the way that it's a boss battle but it's slowly stacking on more mechanics , and the audio chosen too. This just has a lot of polish for a game created in one week and I just wanna say good job on that!!

The only feedback I have is that I wish there was some sort of sound effect to signify that the player's heavy strike is being charge because a couple of times I was worried my input just wasn't being read but I didn't hold the space bar long enough. Not only that but the heavy strike doesn't feel heavy if that makes sense? All the normal attacks have a general woosh sound but a heavy attack should feel heavier than a gentle "woosh" in my opinion.

Also, odd little bug I found was that  for some reason the background music keeps stopping at certain points leaving an empty silence before starting back up. I first I thought it was meant to be in there when your health was low, but as I kept playing the game I realized that wasn't why that happened.

I'm still trying to beat the game as I'm making this comment and I finally got to the last phase on full health and died because I was so caught off guard, but in a good way. I feel like bosses always have phases that catch players off guard causing them to have to start over again and I think you pulled this off extremely well. I usually don't like playing action games where you have to die a lot in order to "get good" but I feel like the attack patterns were pretty fair and by just getting the timing right I'll eventually beat the boss.

TL;DR 10/10 I'm literally in awe of how you made something so polished in a week. Great job!!

Thank you! I'll definitely work on the heavy strike sound if I want to polish it more in the future. 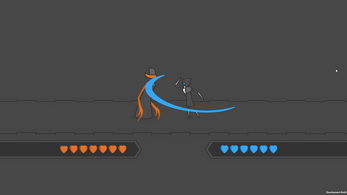 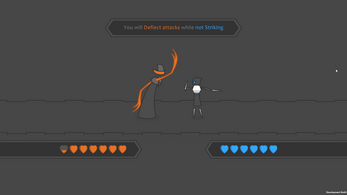 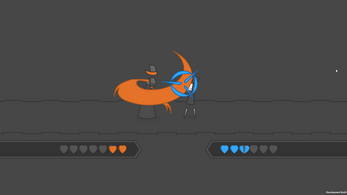